Read the full story on NHL.com/Sabres by clicking the image below: 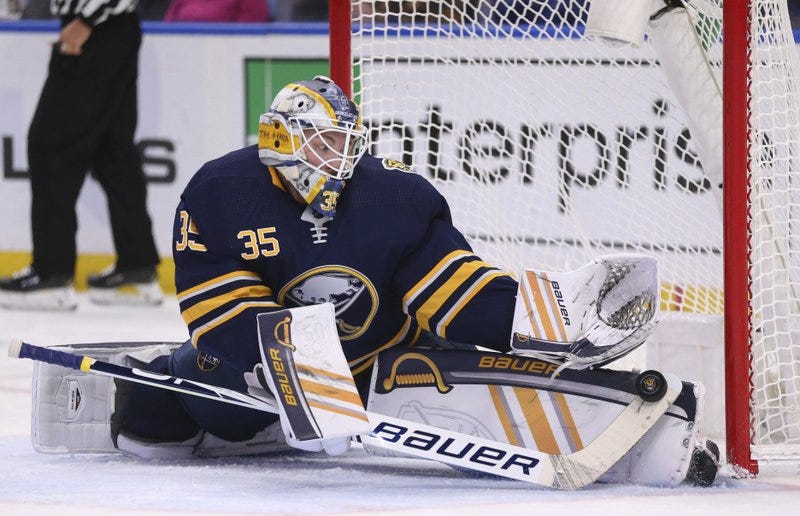 BUFFALO, N.Y. (WBEN) – When it comes to supporting Buffalo’s sports teams, this weekend is all about the red and blue for the Buffalo Bills. But quietly, support is also going out to a member of the Buffalo Sabres who has suffered a personal loss.

Goaltender Linus Ullmark was with the team on Monday when he received a call from his mother in Sweden that his father had passed away at the age of 63.

On Thursday, Ullmark opened up to Sabres.com about it.

“I had my worst pregame skate in my whole life, probably,” he said. “Usually when these things sort of happen, with me, there’s always been a common theme, and that’s been that my dad has either been very sick or that something bad has happened back home. I sensed that something was wrong.”

He said he’d been checking his phone a lot since his father entered the hospital early last week. When Ullmark reached the locker room, he found that he had a missed call from his mother.

“The hunch that I had was true,” he said. “She just wanted to call me and say that that afternoon, Dad left us. He left us around 5 very peacefully, calmly with her by his side.”

Linus Ullmark has been a friend and supporter of the SPCA Serving Erie County. Last year he sponsored a program called Ullmark’s Barks. It brought more social media attention to animals that were having a harder time getting adopted.

“That was all Buffalonians needed to hear,” said SPCA Chief Communications Officer Gina Lattuca. “People started calling and asking how they could contribute to Ullmark’s Barks in memory of Linus’ father.”

Lattuca said they set up this special SPCA page for contributions >>.

“Linus is such a remarkable man. It gives you an indication of what kind of man his dad was. We think Buffalo is the most compassionate city in the nation and we’re honored to serve this community.”